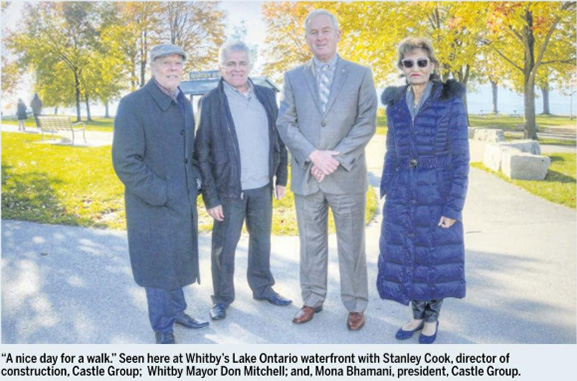 Walkability is one of those urban planning buzzwords that sounds good in theory but may leave you wondering if it is only a pipe dream.
Consider it good news that we have found two places where it exists for real — one is an established neighbourhood in downtown Toronto and the other is the Town of Whitby.
First up is Yorkville, and you can read about it on page 4, where Great Gulf is building a new condo called
8 Cumberland.
Yorkville is obviously one of the most appealing neighbourhoods in Toronto — a walker’s paradise and apparently it will get even more walkable with the arrival of 8 Cumberland “which will create a new gateway to the Yorkville District,” says its developer.
When it Comes to walkable communities, however, there may be nobody more ambitious in planning for it than the Town of Whitby, just east of Toronto, which visited this past Tuesday.
There, Castle Group is developing a boutique condo project
called Harbour Ten10 with occupany scheduled for 2020.
The developer commits to healthy living not just in terms of its on-site amenities, but offering easy access to the area’s parks and trails.
It seems only fitting then we would set out on a pleasant Tues-
day morning and stroll along the boardwalk at Heydenshore Park. which runs along Lake Ontario.
Judging from our walk. Whitby’s natural advantages are plain to see and this is a town With a high level
of “walkability” already built in.

Joining us also is Whitby Mayor Don Mitchell, who happens to be a of ‘walkability champion,’ so much so, he is making it key to planning for Whitby’s growth.
And so I had to ask him where he gets his inspiration from. Mitchell cites a book called Walkable
Cities written by urban planning expert Jeff Speck. Which he says he routinely hands it out to all the
local builders and developers.
Walkable Cities. and a just released companion title called Waiknble City Rules: 101 Steps Making Better Places, is a set of practical steps that addresses everything from how to sell walkability. to making great sidewalks. to designing roads and biking lanes. and to allow for adequate parking.
And Mayor Mitchell would like nothing better than to see the priinciples of ‘walkability’ being applied
even more, adding the next step in all this will be a series of ‘multiuse’ paths that connect the town’s
north to its south, and to link all of its natural areas.
Working in Whitby’s favour is the waterfront and beaches area, extending from Ajax to the west
and Oshawa to the east. and completely accessible to the public.
And then there’s all the other amenities. My tour also includes stops at the Lynde Shores Conservation
Area, the Iroquois park Sports Centre, and the new Cullen Central Park where pickleball and bocce ball courts, and a dog park are being added.
Also coming, I’m told, is the massive new Nordik Spa scheduled to open in the fall of 2019. which is
already creating quite the buzz.
With all these developments, this a good time to think about the future — Whitby is expected to grow by 65,000 more residents in the next 20 years.
Good to see that ‘walkability’ is at the centre of its plans.